New Delhi: On Your Call, Dalai Lama takes on some questions from across the country, including one from Narayana Murthy of Infosys. Below is the full transcript of the interview.

NDTV: Traditionally we celebrate the arrival of a new year, but in the beginning of this new year, India is a country united in grief and anger against the brutal rape of a young girl. On this special episode of Your Call I am joined by a very special guest, the one man who can perhaps give us some sense of peace as we try to comprehend the brutal happenings around us, the Dalai Lama. It’s a time when in India there is a great sense of grief and anger because of what happened to a young girl. What would your message be Your Holiness, at a time like this?

Dalai Lama: Of course, firstly, such incidents are really very sad, very sad. Now India is a huge country and with long history. I think a very civilized culture heritage. India had a culture of non-violence, Ahimsa, at least two to three thousand years ago. They had in modern times during freedom fight, difficult period. The Indian leaders follow thousand years’ old principles, then also, religious harmony on the basis of mutual understanding is also very much alive. So now I think overall picture of India, I think the material development with modern education increasing or developed, then it’s very helpful, but at the same time particularly people must pay more serious attention. You see the modernisation including education and thousand years old your own traditional values, these things are the basis of moral principal. Now that is lacking. I think they are neglected. Now over 53 years India is my home now. So big towns, big buildings, a lot of cars, lot of facilities are much improved even in my own place Dharamshala. Over 50 years it is much changed, but in meantime like these incidents and also lot of corruptions, injustice of activities here and there. Now people particularly people must think more seriously how to keep your thousand year old tradition. Basically the human values, these are very important. END_OF_DOCUMENT_TOKEN_TO_BE_REPLACED

Today’s Lhak-Kar “His Holiness Dalai Lama soil day” which fall on an auspicious day of great Buddhist Mahasiddha Guru Padmasambhava “Tsechu”. Four days long Tsechu Drubpa is performed every year in the ninth month of the Tibetan calendar at Druk Sangag Choeling Monastery, Darjeeling. This Monastery is head quarter of Drukpa Lineage of Drukpa Kargyud tradition of Tibetan Buddhist which founded by first Drukpa Thuksey Rinpoche in 1973. This is biggest Monastery in North-East part of India.

On this auspicious day, Druk Sangag Choeling Monastery, Darjeeling performed the Garcham or Lama Dances.  Garcham started morning at 07:00hr will last till 17:30hr. In this year Tse-chu Lama Dance is witnessed with more than 2000 thousand people from all corner of Darjeeling, Sikkim and foreign countries like Bhutan, France, Australia, Monaco, England and Nepal. This Lama dance (Cham) is very unique culture of Tibet which originated in the 17th Century. I believe performing this kind of ritual dance is great bless for every sentient being those who are follower Tantrayana.

In this context it is a tantric meditative practice adopting the form of very special dances, where the practitioners perform in full costume according to prescribed rituals, using gestures, song, music and costumes.

The Tsechu Lama dance is performed to celebrate the birth of the great Buddhist mahasiddha Guru Padmasambhava. This garcham dance was originated in the 17th century from visions of Guru Padmasambhava. They are performed publicly, in order to dispel all that harms, sickness and to increase what is positive in our life span, merit, bring peace, happiness and wisdom to this world.

In needful times Guru Padmasambhva has great power to grant blessings, both due to his vow to protect beings in this dark era and of his full accomplishment in compassion and wisdom. There are many different types of lama dances; the first day dance, the black hatdance, and the dakini dance for purifying and removing obstacles.

In Praise of Mahakala

Though the power of your great compassion,
You arise in a fierce form
To increase the happiness of all living beings
And preserve the teachings of the Victorious One.

This year Zürich parade theme is the FOLLOW YOUR HEART because it is the symbol of peaceful coexistence and highlights the corners, nooks and crannies, various facets and potholes that each of us carries. Let your heart sparkle and shine brightly like a precious stone, organizers says, but we Tibetan youths are took part Zürich street parade not for fun and entertain rather we show the world that we Tibetans are suffering under communist dictatorship. We took part this street parade with Tibetan National flag and some placards mainly because this year Zürich Street parade organizers invited some Chinese from mainland. There were around 1 million music lovers took part and live telecast in Swiss TV channels.

In this picture taken August 11, 2012, thousands of people gather in the city center of Zurich, Switzerland, as they participate in the annual Street Parade ‘Follow your Heart!’.

Dancing to the rhythms of techno music and dressing themselves in fancy costumes the participants enjoyed a peaceful and colourful party at the shore of the Zurich lake.

His Holiness 77th birthday celebrated in Dharamsala and Switzerland

Tibetan spiritual leader the Dalai Lama celebrated his 77th birthday in Dharamsala amidst the presence of thousands of Tibetan in exiles and foreigners.

On his birthday, large crowds began to assemble since morning at the Tsuglagkhang temple in order to be the part of birthday celebrations.

“Special prayer sessions were held for the long life of His Holiness,” Tashi, a Central Tibetan Administration (CTA) spokesperson has been quoted saying to IANS.

On this occasion also present was The 17th Karmapa, Ogyen Trinley Dorje, who has been living here for the past few years.

Apart from these, a group of Chinese settled in various countries also greeted the Nobel laureate on the occasion.

On this occasion the entire cabinet of the CTA and Prime Minister-in-exile Lobsang Sangay, Chairperson of Tibetan Parliament Mr. Penpa Tsering and other distinguished member were present. Here is statement of Parliament  and statement of Kashag

Tibetans in Switzerland also celebrated His Holiness birthday in Rikon Tibetan Institute. Tomorrow there will be grand celebration of His Holiness 77th birthday at Bülach, Switzerland. More than seven thousands Tibetans and supporters are expected to join the celebration.

His Holiness was born July 6, 1935, at Taktser hamlet in northeastern Tibet, the Dalai Lama was recognized at the age of two as the reincarnation of the 13th Dalai Lama, Thubten Gyatso.

The Dalai Lama fled Tibet after a failed uprising against the Chinese rule in 1959, and formed his government-in-exile here that never won recognition from any country.

The spiritual leader won the Nobel Peace Prize in 1989 for his non-violent campaign for democracy and freedom in his homeland. Since his stay in India, he has spent his time in exile pushing for autonomy for Tibet.

102 types of mineral deposits in over 3000 mine beds with an estimated value of about 600 billion Yuan, (USD 100 billion) in Tibet

Schaffhausen: 29 June, 2012    A multi-metal mine in resource-rich Tibet has been found to have the potential to be one of the world’s 50 biggest mines of its kind that could generate an annual product value of USD 712 million from 2015.

The mine located in the birthplace of Tibetan King Songtsen Gampo about 68 kms from provincial capital Lhasa may become the country’s biggest copper town in 10 years, Jiang Liangyou an official of Tibet Huatailong Mining Development said.

The mine is likely to dethrone Dexing in east China’s Jiangxi as China’s biggest copper producer and it could produce metals to the annual value of 4.5 billion yuan (about USD 712 million) by the end of 2015, he said.

END_OF_DOCUMENT_TOKEN_TO_BE_REPLACED

This was the first time that the two Nobel Peace Laureates were meeting.  Details of the meeting have not yet been found for public. 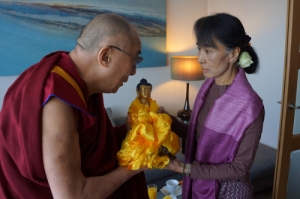 Suu Kyi, who is currently on a five-nation European tour, delivered her Nobel Peace Prize acceptance speech in Oslo on June 16, more than two decades after receiving the honour.

She was jailed in 1990, soon after leading her pro-democracy party to victory and spent much of the past 24 years under house arrest.

The Dalai Lama had often in the past campaigned for Suu Kyi’s release with other fellow Nobel laureates.
Soon after she was freed in late 2010, the Tibetan spiritual leader, in a message, welcomed her release.

“I welcome the release of fellow Nobel laureate Aung San Suu Kyi and extend my appreciation to the military regime in Burma. I extend my full support and solidarity to the movement for democracy in Burma and take this opportunity to appeal to freedom-loving people all over the world to support such non-violent movements,” the Dalai Lama said.

His Holiness is currently on a 15-day tour of England, Scotland, and Italy.

The Tibetan leader is scheduled to visit Westminister today and address British parliamentarians. 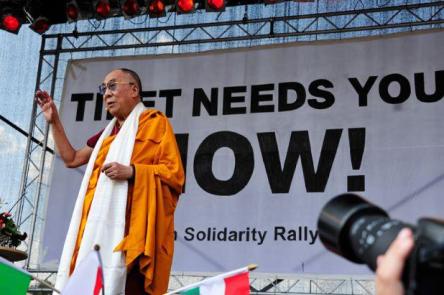 WIEN — Up to 10,000 people came out to greet the Dalai Lama on Saturday after Vienna ignored warnings from China that ties with Beijing could be harmed by hosting the exiled Tibetan spiritual leader.

China made its objections clear to the 76-year-old Nobel Peace Laureate’s meetings with Austrian leaders but Chancellor Werner Faymann said he would decide whom to meet.

The Dalai Lama, who is on an 11-day visit to Austria with the prime minister of Tibet’s government-in-exile Lobsang Sangay, spoke at Vienna’s historic Heldenplatz (Heroes’ Square) for about 30 minutes to a crowd of 10,000, organisers said.

Speaking from a stand emblazoned with the words “Tibet needs you now”, he underscored the importance of protecting Buddhist culture, the environment and human rights.

“Our time will come, it is close. Democracy is universal,” said Sangay, who spoke before the Dalai Lama.

He referred to the Arab Spring uprisings that toppled veteran dictators in Libya, Egypt and Tunisia as well as Myanmar pro-democracy leader Aung San Suu Kyi who was released from seven straight years of house arrest in November 2010 and has now been issued with a passport, enabling her to travel abroad for the first time in 24 years.

“All the promises that were made in 2008 at the time of the Olympic games have been broken. The Tibetans are in a minority in their own region,” a member of the Save Tibet organisation who gave her name as Erika told AFP at the rally. END_OF_DOCUMENT_TOKEN_TO_BE_REPLACED

Expressing concern over violations of human rights in Tibet, the Central Tibetan Administration (CTA), the democratically elected body of the Tibetan exiles, has called upon Beijing to restart dialogue to end the ‘conflict’, an official statement said here Monday.

“The conflict can be resolved through sincere and constructive dialogue and negotiations at the highest level between the government of the People’s Republic of China (PRC) and His Holiness the Dalai Lama or his representatives,” said the statement quoting a declaration of the Sixth World Parliamentarians’ Convention on Tibet that concluded in Ottawa on Sunday. END_OF_DOCUMENT_TOKEN_TO_BE_REPLACED